Wow - what amazing feedback to the Euan's Guide Beta site - thank you so much to everyone who has got in touch whether individual, venue, friend or anyone else!

Time seems to have flown since we launched on 1st November and are delighted to say that we already have nearly 200 venues featured on the site. These are a combination of both individuals leaving reviews or venues listing their own accessibilty attributes. We are also pleased that visitors seem to be coming from a variety of locations from Edinburgh to London,  Southampton to Dublin, Belfast to Aberdeen and a few more inbetween. We've also had some more enquiries from international parts so look forward to expanding the site to encompass lots more destinations soon.

We've also been having lots of fun! Euan's sister Kiki was recently interviewed for the BBC Scotland Culture show - you can hear what she had to say on BBC iPlayer here.

And, being rugby mad, Euan's other highlight of the past few weeks has been meeting the great Joost van der Westhuizen. As well as Euan's Guide, Euan is the founder of the Euan MacDonald Centre for Motor Neurone Disease Research and Joost was in Scotland to raise awareness of his own charity - the J9 Foundation. Here's a couple more photos from the fundraising evening for their two charities at which we were delighted to be present. 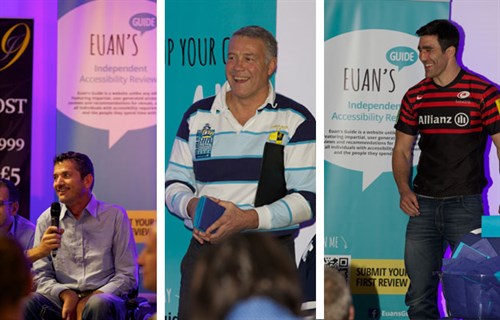 So - after a fantastic couple of weeks, we are delighted with what you're saying about us - but please don't stop! We need many more people to submit reviews and many more venues to list on the site to truly make this a resource for disabled people and people with accessible requirements.

Please spend just a few minutes to register and submit your first review... Or your second... Or your third... Or mention us to your favourite accessible bar, restaurant, hotel or visitor attraction... Or even just keep talking about us to anyone that you think might benefit from the site... It's all very much appreciated!