This week we hear from our Ambassador Janice in Dumfries and Galloway who has been visiting Commonwealth Graves as part of their Doors Open Day event.

Last weekend I attended one of the 37 Venues in Dumfries & Galloway which were participating in Doors Open Days, Dumfries & Galloway 2021, a free festival which was held over 2 days in the region, to promote heritage, culture, buildings and sites, old and modern.

Doors Open Days, Dumfries and Galloway 2021 is part of Doors Open Days Scotland 2021, which offers the opportunity to access hundreds of fascinating buildings and venues throughout September 2021. Doors Open Days started as an event when Glasgow was European City of Culture in 1990, and as a result of its success, in following years other areas in Scotland participated, with over 1,000 venues in Scotland anticipated to be open for free this September. It is the largest free festival celebrating heritage and culture in Scotland. This year because of COVID restrictions it is possible to view some of the venues digitally. They have a website with a search facility to see which venues are open in each area of Scotland: doorsopendays.org.uk.

I found out about the weekend on Facebook, and the programme provided access information for each venue, such as parking, accessible toilet, whether the venue had wheelchair access, limited wheelchair access, where was not accessible, whether a hearing loop was available, if there were refreshments available and if they were providing events for children.

Dumfries and Galloway is a vast area covering 6,426 km2, and there were 37 venues in the programme, ranging from Annan & Ecclefechan in the South East of the Region to the Mull of Galloway 104 miles away in the West of the region. There are many areas of historical & cultural significance in the area and the venues included Neolithic & iron age sites, castles, churches, medieval towers, Scotland’s oldest theatre, museums, standing stones, sculptures, some of the first Christian pilgrim settlements in Britain, a WW2 Prisoners of War Chapel, the building and garden that inspired JM Barrie to write Peter Pan, Mull of Galloway Lighthouse (Most southerly point on mainland Scotland), and the Remembrance Garden & Memorial to the Lockerbie Air Disaster.

I chose to go to the Guided Tour of the Commonwealth Graves in my local cemetery, which was of particular interest to me, as there are a number of Norwegian graves in the cemetery, the exiled Norwegian army were based in Dumfries during WW2, and were billeted locally, also because my Great Uncle died in India in WW2, and the Commonwealth War Graves Commission tend to his grave. 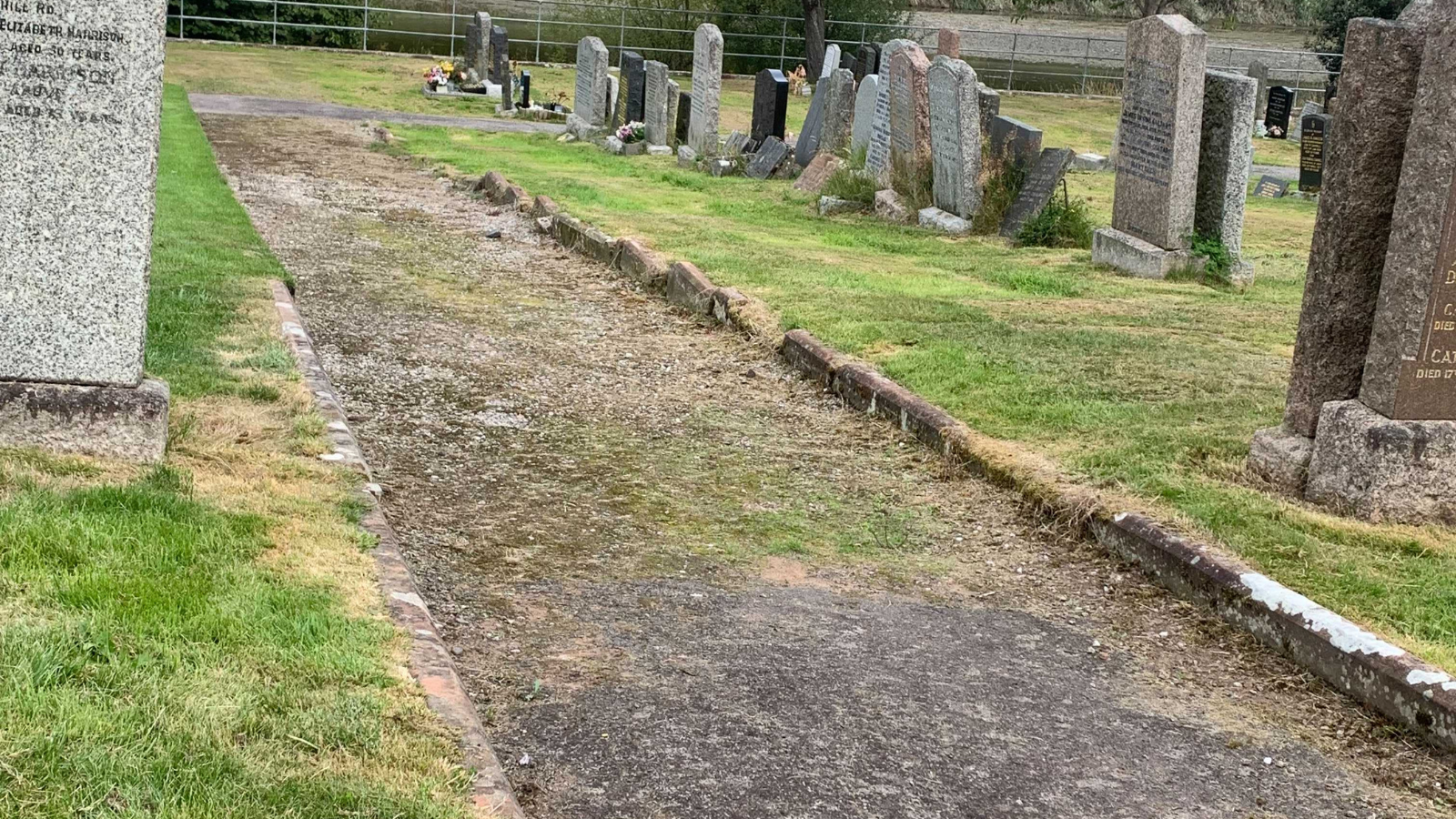 Photo of: A pathway within the grave site.

The graveyard can be accessed from the adjoining car park, and the programme had given it the wheelchair accessible symbol, however, I found some areas of it quite rough & steep for the power chair, so could not actually get close to see some of the things they were pointing out in the tour.

One of the ladies from the Commission called Sehar kindly came across and gave me a one-to-one guide around the tour, Sehar was very informative, and the tour was really interesting. The Commission looks after the graves of 62 casualties of WW1 and WW2 in the cemetery, there are several nationalities, British, Norwegian, Australian, Canadian, Czechoslovakian, and German and Italian Prisoners of War.

The tour included information about individuals, stories about their life, the service they gave, the different nationalities, different types of headstones, the meaning of the inscriptions, and about the work worldwide of the commission. I found one grave in particular very sad with the inscription ‘Known Unto God, I was interested to learn, that the phrase had been selected to be used on the graves of unknown soldiers by the author Rudyard Kipling, who was the first literary adviser to the predecessor of the commission, and that the phrase appears on more than 212,000 Commonwealth Commission Graves Across the World.

There was also a display of Military Vehicles and Costumes and displays about the Commonwealth Graves Commission’s Work in a nearby park. 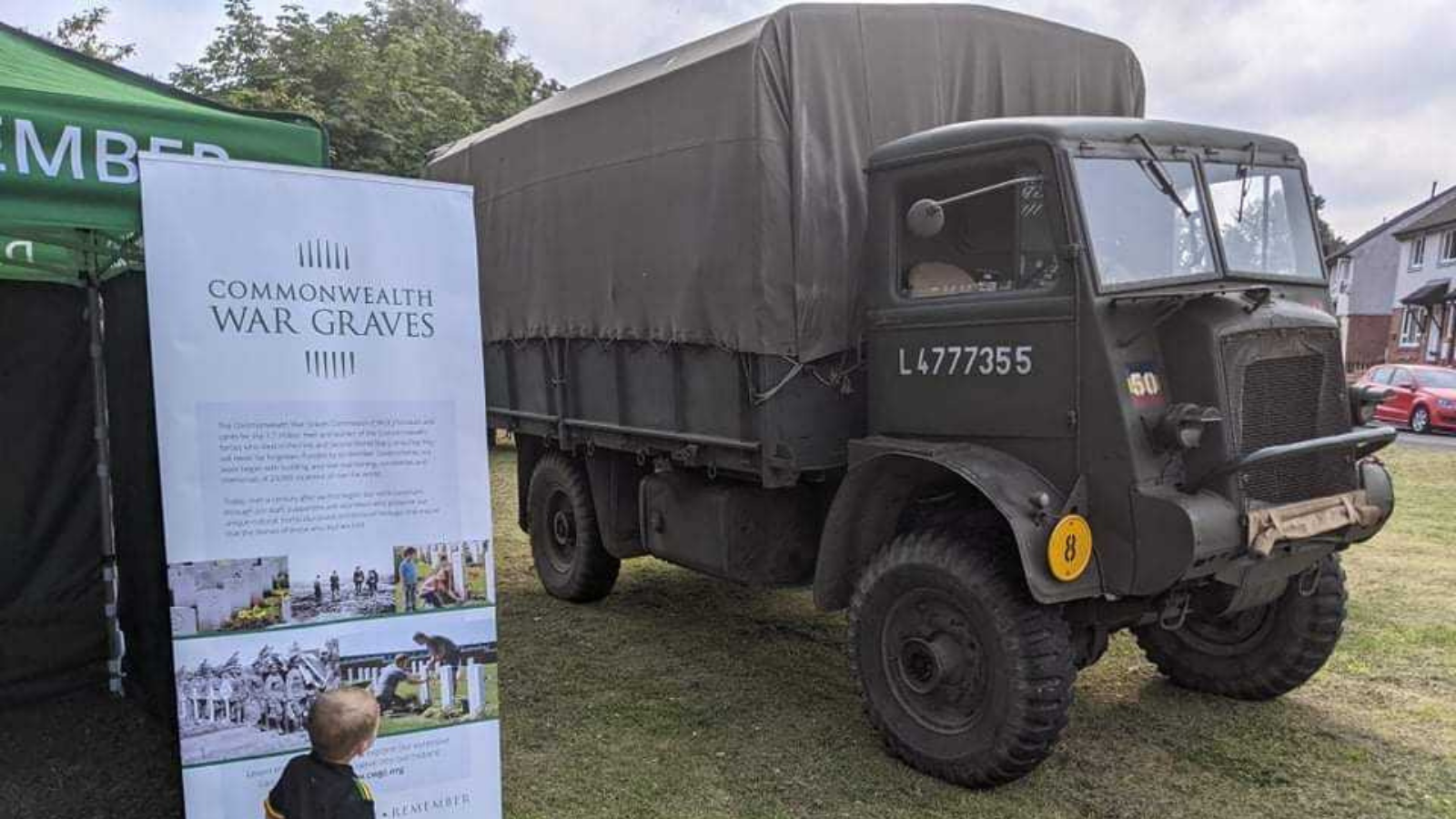 Photo of: A military vehicle with an information banner sign next to it telling you about the Commonwealth War Graves.

All and all it was an interesting day out, and I would definitely repeat the experience. The Doors Open Day Scotland 2021 is running for the next two weekends in September, and further information is available from their website doorsopendays.org.uk. Information about their work and cemeteries worldwide is available on the Commonwealth War Graves Commission’s website cwgc.org.

Doors Open Day will be heading to an area near you in September, with Fife and Glasgow on 18-19 Sep and the Lothians and Argyll and Bute the following weekend. Head to their website for more information.

Euan's Guide Ambassadors are a valuable group in helping improve accessibility across the UK and beyond, we can't thank them enough for all their help. You can read Janice's review of visiting the Troqueer Cemetery by following this link.