Our Euan’s Guide Ambassadors have such a wide range of interests, we’re always fascinated to hear what they are up to. When we heard that one of the earliest Ambassadors, Gary Smith, had been selected to join the Team GB curling team we were delighted for him! We managed to grab him for a chat so that we could share his story with you. 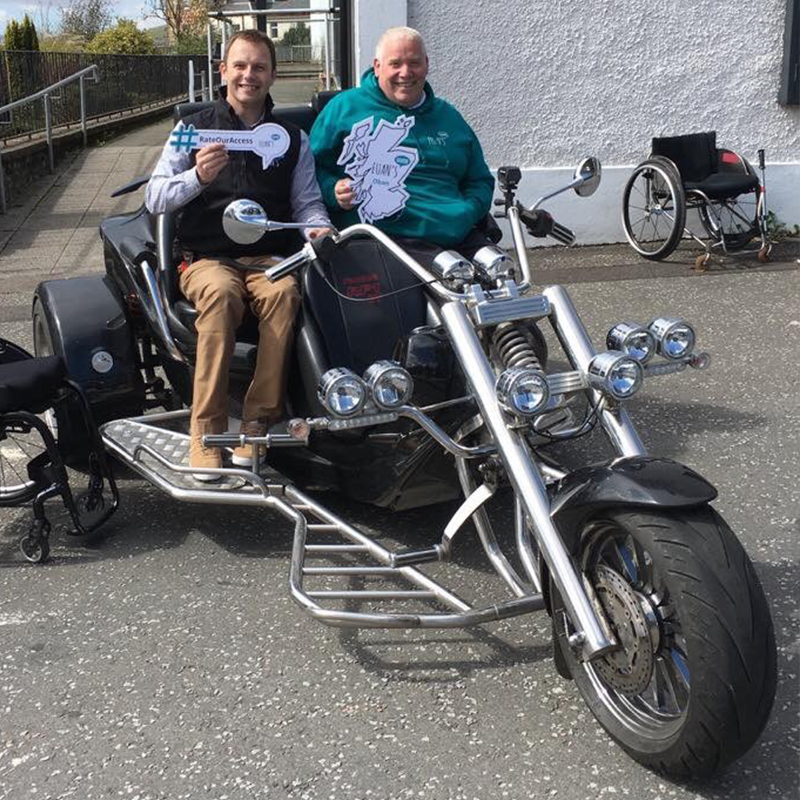 Hi Gary, thanks for popping in to see us at Euan’s Guide HQ! Firstly, can you tell us a little bit about yourself?

I am Edinburgh born and bred and I am proud to be an ambassador for Euan’s Guide. I have been interested in sports since a young age, although when I was at school there was no real provision for disability sports as I went to a mainstream school.

When did you first get involved with Euan’s Guide?

I have been involved with Euan’s Guide almost from the beginning, firstly as a reviewer, then eventually an Ambassador. There will be a few that know my story as to how I got involved with Euan’s Guide, but it was a chance meeting with Paul Ralph, Euan’s Guide’s Access and Inclusion Director, that started it all off. I had not long been made medically retired from my job within the NHS and was trying to find something to keep me busy and my mind active. I had thought of trying to review places for disabled access and create a website with this information to help other people with disabilities. I met Paul one day and, without even knowing what my plans had been, he started telling me about this wonderful disabled access review website that he was involved in. I was hooked immediately and thought to myself, “why try and create something that’s already been done when these guys have the knowledge and expertise, compared with me on my own creating a website etc., which I had never done before?” It was obvious from the way Paul spoke about Euan’s Guide that we shared the same belief and passion to help others so to me it was really obvious I wanted to be part of it. Shortly after that first encounter with Paul, I started writing reviews for them,  and I was thrilled to receive the first reviewer of the year award in 2014. I then went on to be one of the first Ambassadors for the charity. As an Ambassador I feel it’s my role to get out as much as possible and spread the word of the great work that Euan’s Guide do to try to improve accessibility and tell people about the website. This could be to random people who are willing to listen to me, venues who could benefit from having their venue on the site to promote their accessibility etc. I am also occasionally asked to represent Euan’s Guide at different events, such as trade exhibitions along with staff from the office. Pretty much anything Euan and the team want me doing I’ll be there if at all possible to help in any way I can.

Have you always been a curler?

For many years I played Wheelchair Basketball. I was fortunate enough to have travelled playing the game I loved. Playing in the British league I travelled all over, I was also lucky enough to have the opportunity to play in tournaments as far as the USA and Japan. Eventually injury forced me to retire from playing basketball. The competitive side of me kept missing this so I tried looking at other sports. My first ever basketball coach had taken up Wheelchair Curling after he gave up coaching basketball, and he managed to reach the heights of representing Scotland in Wheelchair Curling and competing in several winter Paralympics for Great Britain. I thought I would give Wheelchair Curling a go, so went along to my local rink where there was a club starting up and he was the Coach. The way Curling is set up, you can be a member of more than one club, so I became a member of Lothian Wheelchair Curling Club and also South Lanarkshire Wheelchair Curling Club who play out of Hamilton Ice rink. 4 years on and I was selected to the GB Development Squad. now I have progressed to be selected to the senior squad, the Performance Squad. 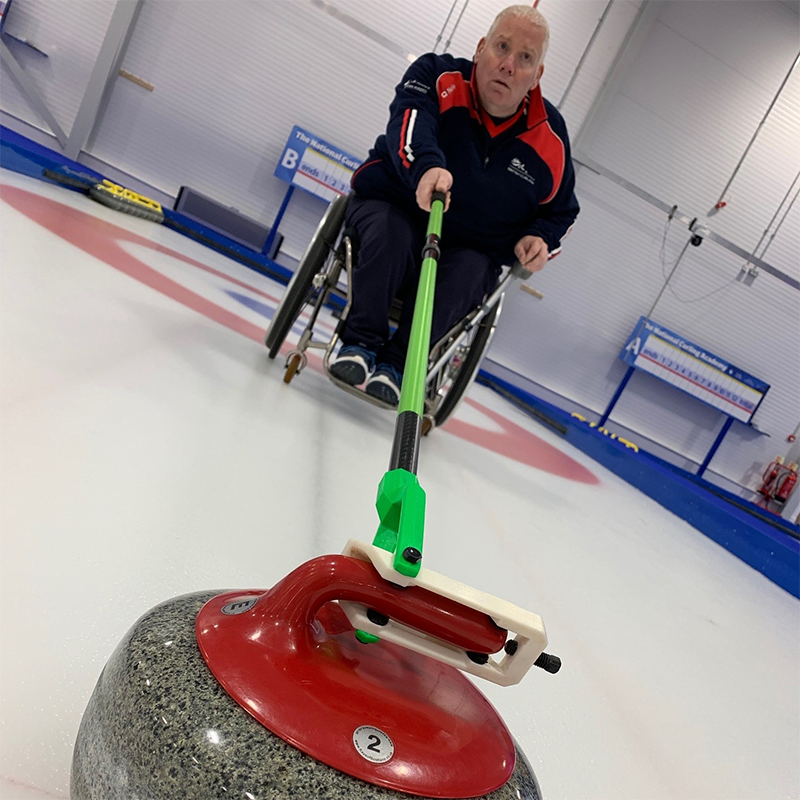 How did it make you feel to be selected?

I was over the moon to have been selected to be part of the GB squad. To be given the opportunity to play any sport at the highest level and the chance represent your country, family and friends is a great honour.

How did you celebrate?

I am quite a shy and laid back character so I didn’t really celebrate. I know I’m just at the start of a long hard journey to where I want to be, so there’s no reason to celebrate just yet! But that’s not to say I’m not proud of my journey so far.

You mentioned that you are at the start of the journey, are there any changes that you have had to make to your daily routine now that you have been selected?

Since being involved in the GB squad my life has changed massively. You have to obviously watch your diet, train on ice a few days a week, have strength & conditioning sessions a few days a week as well as Cardiovascular sessions making sure your fitness levels are good. There is also tactical observation work that we have to do which involves watching videos of games and analysing them. We also have to keep a diary every day of how we are feeling, the hours of sleep we get, how our nutrition is etc. and do movement and conditioning exercises daily.

How often do you get to meet up and train with your Performance Squad team mates?

We have 3-day squad training camps at Stirling based at the National Curling Academy every second week which are generally long tiring days. The week in between we do home based training sessions where we will only generally have one day at Stirling and the other days training individually at your home rinks. My home based gym sessions are done at the Oriam’s Performance Centre at Herriot Watt University in Edinburgh.

What challenges do you face to be able to compete as part of the GB squad?

Apart from the obvious one of keeping fit and healthy, the main challenges in the quest of reaching my goal of getting selected to be on the plane for Beijing are on the financial side. Although at world class performance level we get some financial assistance towards costs from UK Sport (which is reviewed annually based on predetermined competition targets), it is still a challenge financially to meet the training, travel and accommodation costs. Each week at camp can cost between £200-300 for accommodation and then there are the travelling costs on top of that. Equipment wise, a cue alone will cost around £200+. There are also the repairs to your wheelchair. Then you have the cost of any club competitions you want to play in. It all adds up over the course of the season.

What do you enjoy most about curling?

The competition and also the friendliness of the vast majority of players.

What tips would you give anyone looking to take up curling?

If you are interested in giving Curling a try, I would recommend you look at the Scottish Curling website in the first instance. It is not only Wheelchair Curling that is catered for, it is various disabilities. 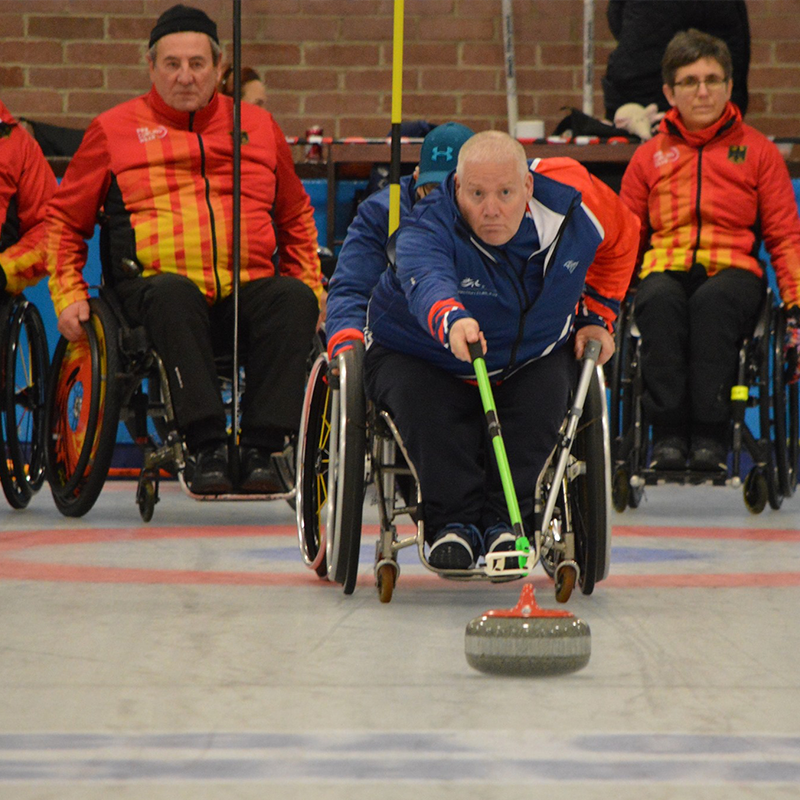 Image of Gary curling with competing team in the background

@CP_Consortium @manxheritage The feature wall looks lovely! Just make sure that red emergency cord is not tied up.
@CP_Consortium Thanks for sharing! 😀