Accessible toilets are designed to be spacious for a good reason, but unfortunately this makes it all too tempting for them to be used for storage. Storage for what exactly? That’s the question we asked you, and what we found may surprise you…

Of all the weird and wonderful things discovered in accessible bathrooms, vehicles topped the list as the most common. A giant motorbike filled the space of one toilet, while a slightly more modest moped parked up in another. Scaling it down just a little, a mountain bike was encountered elsewhere in a loo; we wonder if the helmet was there too?

Not everyone travels on wheels of course, and that’s the only reason we could think of for the surfboard that was found in one toilet. Is the plumbing really that bad? At least the traffic is managed, as one person reported a reassuringly large collection of traffic cones in the loo they visited.

When it wasn’t modes of transport taking up space, accessible loos were being used for kitchen storage. Only the cleanest and most hygienic toilets were chosen of course. Catering uniforms topped the list, along with staff cloakrooms, because what else? We were told by one person that they were met by a wall of tinned tomatoes that had to be removed by two members of kitchen staff before they could enter. Then there were those who found champagne buckets and beer kegs on their public loo adventures.

You might have better luck on the High Street, save for a few slightly unsettling broken mannequins that were encountered in one accessible loo. While a few of them were intact, there was a jumbled heap of mannequin parts – torsos, heads, arms – piled in a corner. Is that better or worse than another reported toilet that doubled up as a changing room for anybody to use? Maybe that’s why one Neil Diamond tribute act got confused and was interrupted mid-make-up by someone who was just trying to use the accessible loo…

Bins, bits and bobs already clutter up transfer space, yet accessible toilets seem to accumulate lots of broken things too. We’ve had reports of a pile of broken TVs and monitors in one toilet, while another was made more comfortable with old mattresses. The good news is that if you like any of this stuff there is a disabled access toilet somewhere that contains junk for sale. Bargain!

Some of our favourite ‘fun’ things that were discovered included Christmas decorations, lost property, bricks, a large net of balloons, a games machine, and paint storage if you feel like sprucing the walls up while you’re there. Or if you’re into espionage, definitely search toilets, as one accessible loo was found to contain bags of unshredded confidential documents.

Did we forget to mention the kitchen sink? No, seriously…

The good news is that many accessible toilets live up to their name, and the strange things found in them were simply amusing. One classy toilet had a ‘beautiful Venetian glass mirror’, but if that’s not to your taste you could go in search of the one that has a singing mirror! We particularly enjoyed reports of the toilet with piped ‘learning Italian lessons’ too. The friendliest loo found was covered with wall decorations designed by local children; while the most glamorous toilet was a loo with a view, as it had ceiling to floor windows at the top of the Shard.

The best reports were about toilets that did exactly what it said on the door; they went above and beyond to be accessible. Several toilets were reported to have the option of a right-side or left-side transfer toilet. Another was described as having a well-lit mirror positioned at a practical height along with a shelf, and one had an elbow flush. Top marks!

What is the weirdest thing you’ve encountered in an accessible loo? Tell us on World Toilet Day in an email or on social media using #NotACupboard.

Why did we write this article?

Every year on World Toilet Day, Euan’s Guide aims to highlight the issues faced by disabled people every day as they use toilets in public. Whether it’s tied up emergency cords, misuse or indeed the lack of accessible loos out there, we use this day to raise awareness and drive change.

This year we decided to highlight the problem of toilets being used for storage because we see reviewers writing about this again and again. The more people who share this article and our infographic, the more people we can reach and educate with the message than an accessible toilet is #NotACupboard.

1. Share stories of the things you have found in accessible loos using @EuansGuide and #NotACupboard. Alternatively, you can email us and we’ll share for you!

2. Share this blog or infographic (below!) on World Toilet Day (19th November) or any other day of the year!

3. Add reviews to Euan’s Guide not forgetting to mention the accessible loo (if there was one). This is one of the best ways to tell venues if their toilet is up to scratch or not. A little bit of feedback can go a long way. Add a review here. 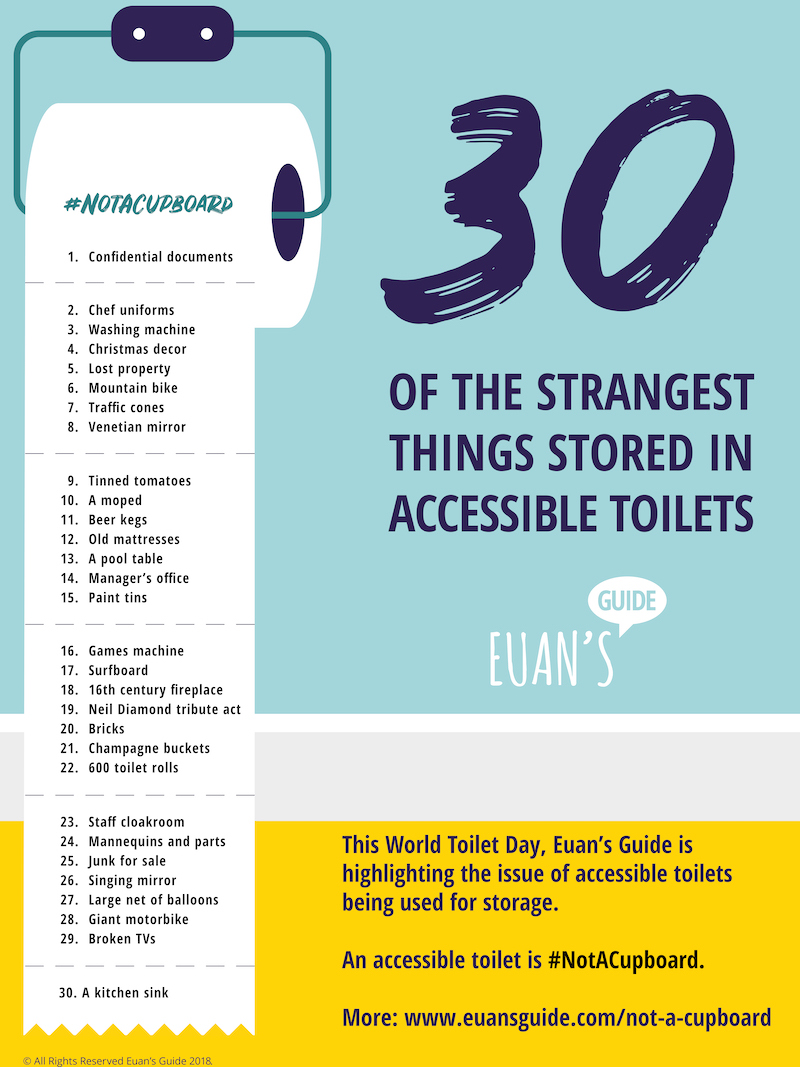