Jarred McGinnis is an author and writer, releasing a new novel in a much different situation from when he started writing it. With some of his creative plans spoiled because of the pandemic, he speaks about adapting to new surroundings.

In April last year, I was co-producing a project with a visual artist, Sam Winston. One by one, all the work of the past three years had disappeared in, what we started calling, ‘the Great Cancellation of 2020’.

By the winter 2020, we had begun working on a new project, a collaboration with photographer Andy Sewell and filmmaker Ed Prosser. By that time, everyone had gotten used to coordinating things online and the project went smoothly. In Billions of Years, the Sun Will Swallow the Earth is now pretty much finished. The resulting installation was made with social distancing in mind, but programmers are still anxious about planning anything that could be interrupted by further lockdowns. The uncertainty continues, but, hopefully in 2022, people will get a chance to see it. At its core it is about being a disabled parent, which doesn’t get talked about much.

We started the Special Relationship about a decade ago as a way of creating new approaches to live literature. Part of my motivation was also to make sure that there was at least one live literature event that was wheelchair accessible. It wasn’t and still isn’t easy, but I think my visibility has made organisations and programmers think harder about access. There seems to be much more of a will to do right, which wasn’t the case ten years ago.

In my personal life, we have been incredibly lucky this past year. We didn’t lose anyone in our immediate family or have any serious hospitalisations. For the most part our extended family has been sensible about masks and following guidelines.

During the first lockdown last summer, my wife was furloughed just as they were closing the schools. So once again, we were lucky. At the time I was doing the final edits of my novel, The Coward, and she took over the childcare. I got an Arts Council England grant, which enabled me to buy a little metal desk that I set up outside next to a compost bin. I did that because it was the place that had the most doors between me getting my work done and the girls loudly being kids. By the time I was finished with the edits, Sarah was back to work, and I took over the childcare. We’re a good team like that.

That moment of pause during the summer made us think about things. Sarah’s job was now work-from-home. Our tiny flat in London was fine for us but it had gotten much smaller since the arrival of our daughters who are growing at an astonishing rate. We also saw further lockdowns and school closures on the horizon and in the depth of a London winter it was too much to take. If we were going to be locked down in the flat, away from friends and family, we might as well do it somewhere sunny and by the sea. So, we moved to Marseille in October, right before the foreseen lockdowns happened. Airbnbs were unsurprisingly cheap. We had a view of the sea for six months. We went swimming in October. We saw the sun!

Marseille isn’t great for wheelchairs. Chunks of it are hilly. Kerb cuts are idiosyncratic. The locals have a belief that anywhere is a parking space if you are brave enough. The metro apparently has only four accessible stations but I have yet to figure out which ones. On the other hand, the buses and their drivers are great. The trams are fantastic. I’ve never had any trouble with taxi drivers having to deal with my wheelchair. The city is small enough that you don’t usually need transport. There are a handful of well-cared-for accessible public toilets but the city could do with a few more. People are always keen to help and are very patient with my abuse of the French language.

By February, we decided not to return to the UK. We have moved into an apartment in the flat part of town and close to the girls’ school. It’s been good and my French is improving. French bureaucracy is famously intricate and it has made me appreciate the relatively straightforwardness of the UK’s systems.

Hopefully in more social and less infectious times we can travel back to the UK to see family and see my own book in the bookshops.

Win a copy of The Coward 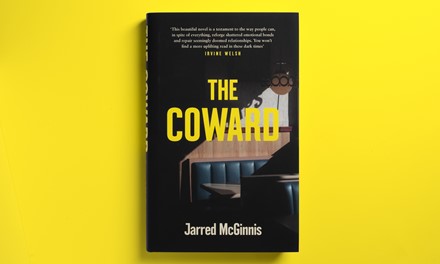 We are @DTGlasgowCtrl today for @DigbyBrownLLP’s #GlasgowHiiD come along and say hello to Antonia and one of our Am… https://t.co/mcNmzLWDCZ
Next week it's @MotabilityOps #TheBigEvent. We'll be there and looking forward to catching up with old friends and… https://t.co/wh60umPncG